What It Is, Why It’s Important, and What We Can Do to Develop Skills

What is Phonological Awareness?

Phonological awareness is the ability to detect rhyme and alliteration; to segment words into smaller units, such as syllables, to put together separated sounds into words; and to understand that words are made up of sounds that can be represented by written symbols or letters.

Why is Phonological Awareness Important?

How are Phonological Awareness Skills Acquired?

What follows is the normal acquisition of phonological awareness skills. It is important to master each skill to be successful in reading:

What Can We Do to Develop Phonological Awareness Skills?

The wonderful thing about developing phonological awareness skills is that there is so much you can do with very few materials. Below are some activities for each skill listed above.

What is the sound that starts these words:

“T” is the sound that starts these words:

Listen, listen to my word

And count all the sounds you heard. (spoken): top

What a good listener that makes you!

*The information for this handout was adapted from Language Disorders from Infancy Through Adolescence, 3rd Edition, by Rhea Paul, a book I have referred to on a regular basis since completing graduate school in 2008. 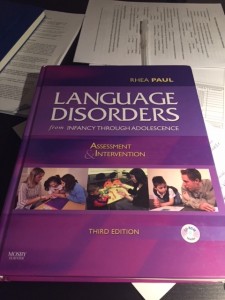 My ride or die book since 2008. Any question I have about language development, disorders, or treatment strategies, this is the first place I look.